SPONSORED POST – The final road trip of the year is perfectly timed: Phoenix in January. While the rain and drizzle won’t relent at home, see the sun, the palm trees and the saguaro while catching a heated division rivalry.

The stadium is in Glendale, land of chain restaurants and fast food. If you want to try something in that vein that you can’t get at home, of course you can hit up In n Out or try Culver’s. They have amazing butter burgers and frozen custard desserts!

But let’s plan to stay in Scottsdale, the sprawling, upscale neighbor to the east of the city. Old Town Scottsdale is action packed with bars and restaurants galore. It’s fun to stay at the Hotel Valley Ho – a uniquely updated 1950’s style hotel with vintage style. It has a great pool and bar scene as well. For dinner in Old Town, I recommend Citizen Public House (7111 E 5th Avenue, Ste. E) and specifically the scallops.

What are you going to do during the day? Well, golf! There are more courses in the area than you could play in a full football season. And even more options if you are willing to drive 45-60 minutes. A few favorite courses:

Wigwam – It’s a hike to get there but they have 54 holes and it is as lushly green as any course in the area. Not easy either!

Greyhawk – 36 holes and none are easy. It’s not cheap, but the course is often used for college tournaments and championships. Plus, Phil Mickelson practices there and the restaurant bears his name.

The Phoenician – Another option for a cool hotel, the course wraps around Camelback Mountain with spectacular views.

Sun City West – No, it isn’t fancy. At all. It is one of a few courses that sits on a retirement community near Peoria. But it is a great value amid high priced options and I’ve had fun picking up with the local retirees!

If you aren’t inclined to get mad at a small white ball that won’t go where you want, a unique option is the Musical Instrument Museum (4725 E Mayo Blvd) in Phoenix. It has instruments from the last 6000 years of music and plenty of interactivity.

A few more dinner spots to consider:
Richardson’s (6335 N 16th St) and its neighbor Rokerij. Richardson’s is famous for New Mexican fare and the Rokerij is a meat-lover’s paradise.

Mastro’s (multiple locations): As good a steakhouse as you’ll find.

Los Dos Molinos (8646 S Central Ave). It is a hike but the authentic Mexican food and homemade tortillas are worth the ride!

That should have you ready for gameday where you should find yourself around enough Seattle fans to drown out the noise of the locals. Make it a ninth home game by saving your voice for Sunday! 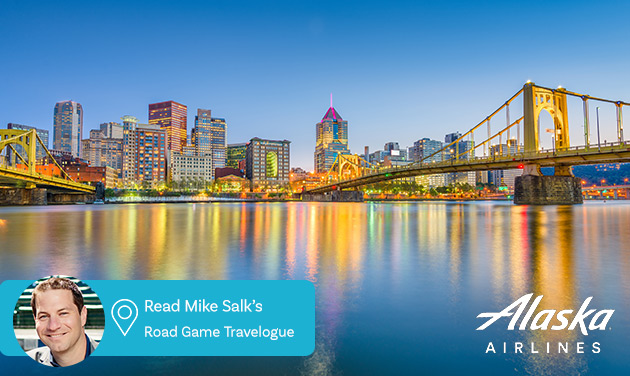