Ty France: ‘Very happy’ with how Mariners are playing, but ‘the job’s not done’ 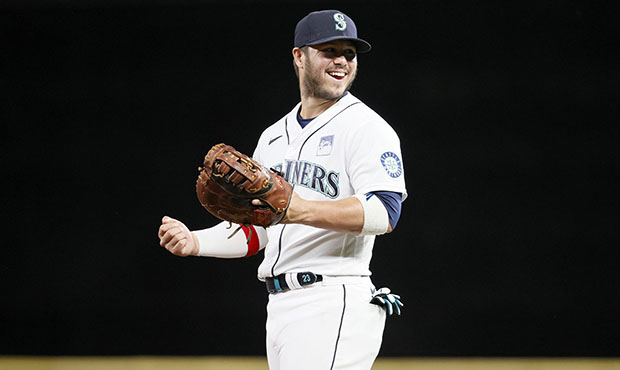 The Mariners are right in the thick of things as far as a playoff berth goes, as the 52-46 club sits just 3.5 games behind the Oakland Athletics for the second American League Wild Card spot.

The state of Mariners’ starting pitching: Where all 5 spots stand

One player who’s been huge for the Mariners this season is Ty France, who started the season as a second baseman and designated hitter but is now getting the bulk of the work at first base.

France has been one of the better and more consistent hitters for the Mariners this year, posting a .276/.356/.429 slash line with nine home runs and 43 RBIs. France leads qualified Mariners in batting average and on-base percentage, and third on the team in RBIs and fourth in home runs.

France joined 710 ESPN Seattle’s Jake and Stacy on Friday prior to the team’s exciting 4-3 win over the Oakland Athletics, where France had two hits, a walk and scored a run.

As you can imagine, this young Seattle ballclub is in a good place mentally given how they’ve been playing of late. And they also know just how critical of a homestand they’re currently in.

“We’re feeling well. We’re just playing good baseball lately,” he said. “… It’s a big homestand for us, but we’ve got to come out and keep doing what we’re doing.”

The Mariners are two games in to a seven-game homestand against the A’s and Houston Astros, the two teams who are above Seattle in the American League West standings. Oakland is 3.5 games ahead of Seattle in the Wild Card race. The July 30 MLB trade deadline is also fast approaching, so a good homestand could push general manager Jerry Dipoto to add to the team for a playoff push this year.

France said that in baseball, because it’s such a long season, you have to take it one game at a time. But he did admit that he and the rest of the team understand this stretch of games is key.

“Oakland’s right above us in the wild card (race) and Houston’s leading the division, so as may steps forward as we can take this week, it’ll be huge for us in the long run,” France said.

Call him the Ty Breaker. pic.twitter.com/Q8KcBHWBKX

The Mariners may be a surprise team to many because of their status as a rebuilding club, but France, who came to Seattle last trade deadline from the San Diego Padres via trade, doesn’t view his team as a surprise playoff contender.

“Last year, we had a strong second half and I think coming in this spring, we all had very high expectations and we’ve held each other accountable,” France said. “I don’t want to say I’m surprised at all (because) I know we are very capable of it. To be at this point in the year where we’re at, I’m very happy, but definitely the job’s not done. We’ve got to keep fighting and see where we’re at at the end of the year.”

Something that could help the Mariners in some of these games going forward is the team’s success in one-run games. Currently, Seattle is 21-8 in one-run games, which is tops in MLB. France is having a lot of fun seeing his team succeed in those contests.

“As a team, the close games we’ve been winning and the amount of fight we have, it’s been to be part of, fun to watch and hopefully the guys can keep that rolling,” he said.

A key part of the team’s success this season, France said, is the coaching staff, led by manager Scott Servais.

“We rely on him a lot,” France said. “He leads the team and the whole coaching staff in general has done a very good job just helping guide us and letting us play our game and putting trust in us to go out there every night and get the job done. So a lot of it falls in their hands and in my short time here so far, I’m very thankful for the way they’ve handled things and just letting us be ourselves.”

Close
Ty France: ‘Very happy’ with how Mariners are playing, but ‘the job’s not done’