Muhammad Ali was the greatest, even though boxing no longer is 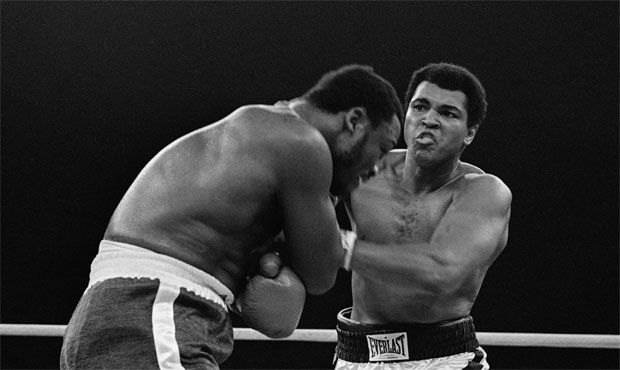 Danny O'Neil wonders if Muhammad Ali would have even been a boxer had he been born 50 years later. (AP)
(AP)
Share

Muhammad Ali was a boxer who became the most significant athlete of the last century.

Well, actually that’s not quite right.

Cassius Clay became Ali and then became the champion who was the most important athlete of the 1900s. His passing on Friday night raised two questions that I had a real hard time answering:

1) Who’s the current heavyweight champion in the sport?

2) Would Ali have even been a boxer had he been born 50 years later?

The answer to the first question is not a Klitschko. Wladimir Klitschko was beaten by an English dude named Tyson Fury who only sounds like a Mortal Kombat character. Fury is scheduled to fight Klitschko again in July, though I had to look that up on Wikipedia.

The Groz recalls the day he met Muhammad Ali

Answering the second question is more complicated, and relates to not just the declining significance of boxing in today’s sporting landscape but also the emergence of the mixed martial arts (MMA) fights best embodied by the UFC.

In fact, it was fitting that Ali was not just acknowledged but lauded during the UFC’s pay-per-view card on Saturday night. Heck, Ali’s son-in-law – a man named Kevin Casey who is married to Ali’s daughter, Hana – fought on the undercard.

This is not going to be a recitation of Ali’s impact or his legacy. I’m not old enough to remember seeing Ali fight, and there are plenty who not only watched and covered him but are more graceful writers. If you want Ali’s life put in perspective, try reading here or here.

What I’m talking about is the current reality that boxing is no longer the world’s most interesting combat sport. The UFC is the promotion that puts together the better fights and the more interesting cards. It’s the UFC that has aired championship fights nationally on broadcast television. The best fighters fight each other – a novel concept – whereas boxing gave us Floyd Mayweather vs. Manny Pacquiao five years too late, when it was expired and Pacquiao was too old to be a credible threat to Mayweather.

Boxing sabotaged itself. Too many promotions with too many belts in too many weight divisions. Too many fighters protecting records instead of fighting the best opponents. Too many promoters trying to tell you a card was great when it stunk.

I may not remember Ali fighting, but I do remember when boxing was relevant. I followed Mike Tyson’s rise to the heavyweight title and his loss in Tokyo to Buster Douglas, which I only learned of while bundling Sunday morning copies of the Herald & News in Klamath Falls, Ore. I had a newspaper route, which I pedaled through as fast as I could that morning to make sure I was back home in time for “The Sports Reporters” on ESPN, which was hosted by Dick Schaap. I watched the replay of that Tyson-Douglas fight at a neighbor’s house since they had HBO.

Less than 30 years later, I had to look up the current heavyweight boxing champion to be sure I was right while I can tell you the UFC title-holder at every weight division for both men and women.

Does it mean boxing is dead? Not necessarily. Maybe there will be an American heavyweight who comes along and revitalizes interest in the sport. But if Ali had been born 50 years later, it’s very possible that he would have wound up being a heavyweight in a different sport, which should tell you how much the fight game has changed.

Close
Muhammad Ali was the greatest, even though boxing no longer is