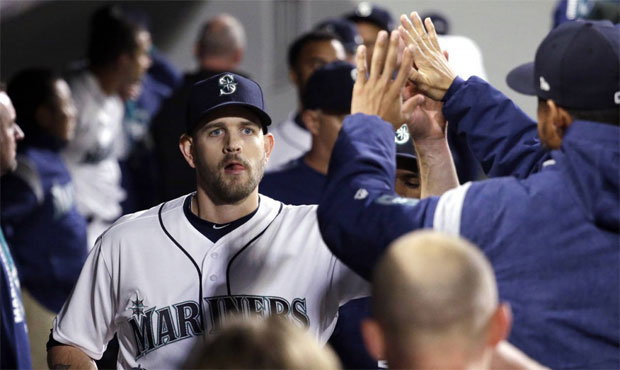 James Paxton is ready to step up as a leader for a young Mariners team in 2021. (AP)
(AP)
Share

The Mariners’ biggest move of the offseason came just ahead of spring training, one that brings a familiar face back to Seattle in left-handed pitcher James Paxton.

Paxton was a fourth-round pick by the Mariners in 2010 who established himself as one of the team’s top prospects before becoming the team’s top pitcher when healthy. After setting career highs in innings and strikeouts in 2018, the Mariners traded Paxton to the Yankees for three prospects in a deal that helped kick-start the team’s rebuild.

With his contract up following two seasons in New York, however, Paxton signed a one-year deal to return to his first team.

“I’m loving being here again. It’s great seeing everybody,” Paxton said Tuesday to Aaron Goldsmith and Gary Hill on The Hot Stove Report on 710 ESPN Seattle. “There’s a lot of new faces, but it’s great to be here. I’m excited to be a Mariner again.”

That was something Paxton echoed while talking to the media Wednesday when asked about comments regarding his negotiations with the Mariners made by Kevin Mather, the team’s now former president and CEO who resigned Monday after a speech he made to the Bellevue Breakfast Rotary Club earlier this month came to light and created a firestorm.

Paxton refuted Mather’s insinuation that he was one of many free agents who would have to come to teams “hat in hand, looking for a contract” and sign for less money than they had previously sought earlier in the offseason due to a lack of options, as this tweet from Mariners insider Shannon Drayer of 710 ESPN Seattle details:

Paxton with the media said that it was frustrating to hear Mather's comment's and that he didn't have his facts straight. "I did have other offers. I did have more lucrative offers but I decided to come here anyway because this is where I wanted to be."

Paxton wasn’t concentrated on the aftermath of Mather’s comments during his visit with the Hot Stove, however, instead speaking more about on-field matters and his return to the Mariners’ clubhouse.

As Paxton indicated, there are plenty of new faces to meet, as the Mariners have only three players still on their roster who played with him in his first Seattle stint. Because of the rebuild, the majority of the new faces are younger players, and at 32 Paxton becomes the second-oldest player on the team. As such, he’s stepping into a leadership position, which is something he’s looking forward to.

“I enjoy that stuff, I enjoy helping other players and teaching them what I’ve learned along the way as well as learning some new ideas from these young guys,” he said. “They kind of have come up in a different era … The analytics have really taken off in the minor leagues since I came through and they have a really good understanding of how all this stuff works, so I feel like I can learn from them when it comes to some of that stuff.”

Paxton also brings something that the Mariners have largely lacked since their last playoff appearance in 2001, and that’s postseason experience. He made three starts in the playoffs for the Yankees in 2019, including a six-inning, nine-strikeout performance in an ALCS win over the Houston Astros. Paxton described the feeling of pitching in the playoffs to Goldsmith and Hill, saying he couldn’t feel his body in the first start.

“I was so jacked up, everything was buzzing. I couldn’t feel the ball in my hand. It was just letting it rip,” he said. “And then each game it got a little better, I got more feel, felt more comfortable out there and by my third (start) I felt more like myself again out there.”

Paxton’s return to Seattle comes on the heels of multiple injuries during his time with the Yankees, most notably a back injury that required surgery. Paxton said that in late 2019, his back and glutes would bug him as he’d raise his right leg in his pitching motion. While preparing for the 2020 season, the injury got worse and he discovered he had a cyst on a back joint, which required surgery. After the surgery, Paxton made just five starts in 2020 before a forearm injury shut him down for the year.

This offseason, he’s been rebuilding his mechanics “from scratch” and focused on improving his core and back strength.

The injury came at a bad time for Paxton, as he was a free agent this offseason. Paxton said that despite entering the offseason in a worse position than he hoped for, he still had a lot of suitors and offers before choosing to reunite with the Mariners.

“Overall, my wife and I decided Seattle was the right place to be for me,” he said. “Somewhere where I feel comfortable and get to live at home in Seattle and get my feet back under me and focus on getting back to myself out there on the mound.”

One difference you can expect to see from Paxton in 2021? Increased usage of one of his pitches.

“I think this year I’ll be using the changeup a little bit,” he said. “… I’m feeling pretty good about it right now. The ball’s coming out great and just feeling good.”

Paxton throughout his career has mostly used a fastball, curveball and cutter/slider. He’s used the changeup at times, but sparingly. He threw his changeup only 1.2% of the time in 2019, per Statcast. That increased to 12.6% in his five 2020 starts, which he said was a result of decreased velocity.

“Last year I wasn’t throwing as hard, so I had to have something to change speeds and really force me to throw my changeup more, and I think that made me get more confidence in my changeup because I had to throw it,” he said. “Going into the offseason and throwing it early in camp here, it’s feeling really good and I feel a lot more confident about letting that pitch rip, so I think it’s going to be a usable pitch for me this year.”

Listen to the full interview, which includes Paxton discussing his spring training goals and analytics, at this link or in the player below.

Groz: Mariners’ next move should be Theo Epstein as team president