Seahawks Quick Hits: Russell Wilson and the offense get cooked by Giants Seahawks QB Russell Wilson and the offense struggled in a 17-12 loss to the Giants. (AP)
(AP)
Share

After seeming to turn a corner with two consecutive wins to get to 8-3, the Seahawks entered the second game of their easiest four-game stretch of the season as heavy favorites to win in Week 13. Seattle responded by playing its sloppiest game of the season.

After scoring a field goal on their opening drive, the Seahawks allowed the Giants to dictate basically the rest of the game on both sides of the football. The result? A 17-12 loss and an 8-4 record.

Let’s dive into some of the key takeaways from the game.

Head-scratching performance from Wilson and Co.

Russell Wilson finished the game completing 27 of 43 passes for 263 yards and a touchdown pass. He also threw an interception that running back Chris Carson should have reeled in and lost a fumble.

DEFENSE IS ON FIRE 🔥

Even though Wilson had games in previous weeks where he turned the ball over more than he did against New York, you could argue this was Wilson’s worst performance of 2020. Instead of Russ cooking, he and the offense were the ones getting cooked, largely by their own doing.

The Giants have one of the better defenses in the NFL, but that’s been aided largely by a very favorable schedule. Still, they made the Seahawks look nothing like the explosive offense we’ve seen this season.

The Giants regularly took the deep ball away with high safeties, which makes sense considering DK Metcalf entered Week 13 leading the NFL in receiving yards. But Seattle still had Wilson looking deep, and the result was him holding the ball too often, not finding other receivers, throwing the ball away and taking five sacks. The underneath passing game wasn’t employed nearly as much as you’d think given what the Giants were presenting, and the result was a poor showing from Wilson and the offense.

Also strange was the usage of Carson, who had 13 carries for 65 yards. At one point, he was averaging over six yards per carry. Pete Carroll raved about how excited he was to have Carson back in the mix and to employ more power runs, but he wasn’t used nearly as much as he should have been.

The killer? A fourth-and-inches in the second half when, instead of letting Carson plow forward to move the sticks, Seattle rolled Wilson out in play action and the pass fell incomplete.

This was a strange and poor game from Wilson, offensive coordinator Brian Schottenheimer and the rest of the crew. Back to the drawing board.

Shades of the Week 11 loss

Take everything I mentioned about the offense, add in a solid defensive performance and what does it sound like? The second half of the Seahawks’ Week 11 loss to the Rams.

In that game, the defense limited Los Angeles to one touchdown after halftime to keep the offense in the game, but Wilson and that crew couldn’t muster much of anything.

People will point at the loss and say that they lost to a backup quarterback in Colt McCoy, but McCoy didn’t do much of anything. He finished the game completing 13 of 22 passes for 105 yards, one touchdown and a pick.

Running back Wayne Gallman had 135 yards on 16 carries, but 60 came on one touch. Alfred Morris had nine touches for 45 yards and two scores. Those two did far more damage than McCoy, and that was due to the fact that for a stretch of time in the second half, Seattle’s offense couldn’t stay on the field.

Some key players in this one were Jordyn Brooks, Jamal Adams and Quandre Diggs.

Brooks, the first-round rookie linebacker, was all over the place and tallied 11 tackles in his most complete effort of the year.

Adams, who also had 11 tackles, added a sack, a tackle for loss and had some nice plays in coverage. He now leads all Seahawks with 7.5 sacks in just eight games. That’s also the most sacks of any defensive back in 2020, and with 0.5 more, he’ll tie the NFL record for sacks by a defensive back in a single season. Pretty wild considering he’s missed four games.

Diggs had the Seahawks’ lone interception on a tipped ball in the red zone and also had big hits, such as one late on tight end Evan Engram, that caused incompletions.

There goes @qdiggs6, still on his feet for the interception! 💨

One small downside? Only two sacks. Seattle had been averaging over five per game since Week 9.

For a while in the game, the Seahawks had scored only five points and either had the lead or were down by just a few points. All those points came due to Seattle’s special teams unit, which has played great all year.

In addition to regular excellence on kickoff and punt coverages, the kickers themselves played well. Jason Myers made his lone field goal attempt on the Seahawks’ first drive and later, Michael Dickson’s punt was downed at the 5-yard line to set up a blocked punt that resulted in a safety. Those five points were all the Seahawks had until Wilson found Carson late for a score.

As great as that group played, it missed a key opportunity that may have changed the game.

That blocked punt that resulted in a safety should have been a touchdown. Ryan Neal, who also forced the interception that Diggs caught, blocked the punt and the ball went right to running back DeeJay Dallas in the end zone. He couldn’t hang on, and Penny Hart tried to fall on it. He got possession but his hand was out of bounds, so Seattle was awarded two points instead of seven.

Punt: blocked ❌ #Seahawks get the safety! 🙏

Should the Seahawks reunite with CB Richard Sherman this offseason? 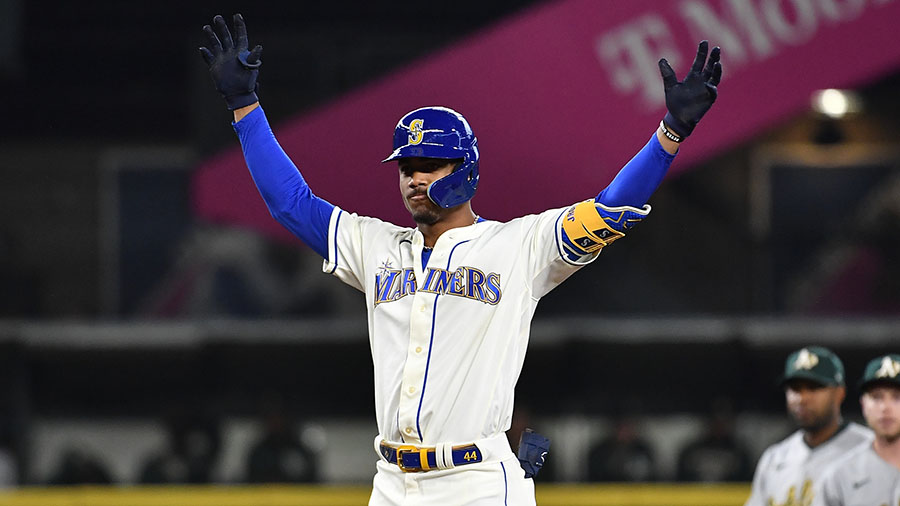 Close
Seahawks Quick Hits: Russell Wilson and the offense get cooked by Giants