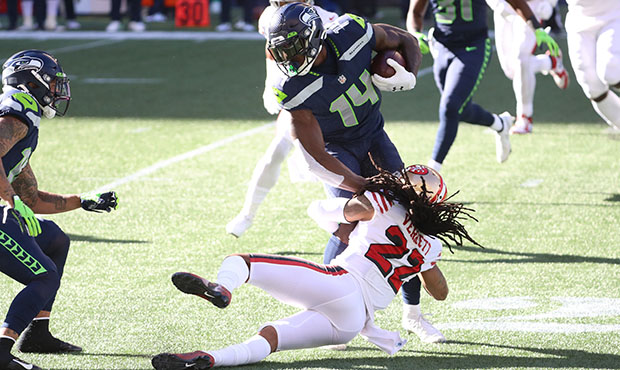 The big question during the offseason was whether the Seahawks had done enough to catch the San Francisco 49ers.

Pete Carroll: What was behind Wagner’s explosive day in Seahawks’ win

On Sunday, the Seahawks got the answer. They beat the 49ers 37-27 and the 49ers are in a world of hurt. Quarterback Jimmy Garoppolo aggravated his high ankle sprain and could be out more than a month. It’s not out of the question for him to miss the rest of the season. Some think the 49ers might review whether they want him back as the starting quarterback. Tight end also George Kittle suffered a broken bone in his foot and is out for the season, and halfback Tevin Coleman re-injured the knee that had him on the injured reserve list earlier.

To make matters worse, the 49ers have to play Thursday against the Green Bay Packers. After that, they play the New Orleans Saints. They could end up being 4-6 and all but out of the playoffs.

Meanwhile, the Seahawks showed an improved defense that limited Garoppolo to 112 total yards of offense. For their next game against the Buffalo Bills on Sunday, the Seahawks are expected to get reinforcements. Jamal Adams, Benson Mayowa, Shaquill Griffin, Carlos Hyde, Ugo Amadi and maybe Chris Carson could all be back.

There also could be the debut of Damon “Snacks” Harrison and Carlos Dunbar. General manager John Schneider’s biggest job this week is finding roster spots. One opened when defensive end Damontre Moore was suspended six games for a PED.

Safe to say, though, the Seahawks not only passed the 49ers but they’ve done it with great distance. Injuries have been the biggest problems for the 49ers. After eight weeks, they lead the league with 58 missed starts. They’ve had as many as 20 players on injured lists and opt outs. Head coach Kyle Shanahan has done a great job of keeping them competitive with his great coaching and general manager John Lynch has done everything possible to keep the roster competitive. Now it’s going to be tough.

The 49ers traded injured linebacker Kwon Alexander to New Orleans for a conditional draft choice and linebacker Kiko Alonso. Because of a tight cap in 2021, most people thought the 49ers would have to cut Alexander, defensive end Dee Ford and others. The cap could be down to $175 million next year and the 49ers have key free agents such as Richard Sherman, left tackle Trent Williams, fullback Kyle Juszczyk and three other cornerbacks to re-sign because their contracts are up.

Because of all the wide receivers who were hurt in training camp, the 49ers needed roster space. They knew that cornerback D.J. Reed wasn’t going to be healthy until the last week in October, so they tried to save a roster spot by putting him on the waived injured list. The Seahawks were stunned. They claimed him and waited for his return. They knew he could immediately step in and help, and he did. Reed was great Sunday. He showed the ability to blitz and to cover, even picking off Garoppolo.

It’s been that kind of a season for the 49ers.