For the first time since physically joining his new team, Seahawks cornerback Quinton Dunbar spoke with members of the media.

Dunbar, 28, was traded from Washington to Seattle for a fifth-round pick earlier this offseason. He was expected to come in and start at cornerback opposite Pro Bowler Shaquill Griffin, but the May robbery accusation kept him busy with legal issues and landed him on the NFL’s Commissioner’s Exempt List until it was announced he was not being charged due to lack of evidence.

Dunbar spoke a bit about the incident, as well as his new team and much more in his first media appearance in months. Here are some of the topics Dunbar covered.

Couldn’t really discuss the incident, wants to put it behind him

Dunbar wasn’t charged for the alleged robbery, but fellow cornerback DeAndre Baker of the New York Giants was. Because there’s still an ongoing legal issue, Dunbar couldn’t comment too much on the specifics of what may or may not have happened down in Florida. He has maintained his innocence the entire time, and that didn’t change on Friday.

“The truth will eventually come out,” he said.

He did say that he didn’t really know any of the people who were the alleged victims who were also allegedly paid off by Dunbar’s former attorney to change their stories to the police. But what Dunbar cares most about is that he is no longer facing any legal issues.

When asked about what he wants people to know about who he is as a person, Dunbar noted that up until the alleged May incident, he had a clean record.

“I feel like before that situation it spoke for itself,” he said. “Never been to jail, never been in trouble, never came (in contact) with the police from doing anything illegal and now all of a sudden when I make it this far and everything I grew up wanting, would I just put it on the line for something silly like that? People are going to believe what they want, but I know who I am and what I stand for that’s all that matters to me.”

He is thankful to be back on the field

Dunbar cleared COVID-19 testing protocols and began practicing recently, and while he’s getting back in the swing of things, he is just glad to be playing football again.

“It was everything, man,” Dunbar said. “I had a long few months just going through the situation I was going through, it was hard for me to do anything, so just getting back to training and running and trying to get back is everything to me.”

Rumors circulated for months that the Seahawks may cut Dunbar due to the alleged incident. That didn’t happen, and Dunbar is glad  the team showed its support.

Impressed with his new teammates

The Seahawks under head coach Pete Carroll have been known to have strong and welcoming locker rooms. Dunbar said that much was true, and that he learned that firsthand before joining the team at training camp.

“These guys are amazing.  They’ve welcomed me with open arms, but they’ve been doing that throughout these last few months,” Dunbar said. “I’ve had guys reaching out to me (like Bobby Wagner), Griffin, just a bunch of guys letting me know that they’re praying for me to hang in there and that was pretty much it. I didn’t expect anything but these guys being the same way that they’ve been treating me.”

As far as on the field work goes, Dunbar hasn’t done much as he’s eased into full activities, but he’s been learning a lot about his teammates by watching them practice. Dunbar compared one young offensive star to a future Hall of Famer.

“Watching from the sideline, (DK) Metcalf looks amazing,” he said. “He looks like (Falcons receiver) Julio (Jones) out there. So I’m just looking forward to getting better with him and looking forward to matching up with him when I finally do get those intensive reps.”

And the guys he is joining in the secondary have made a good first impression as well.

“I haven’t been out there much, but watching those guys go out there and fly around, watching (Jamal) Adams out there flying around, watching Tre Flowers out there competing and making plays and Shaquill making plays (is great),” Dunbar said. “I’m not here to step on nobody’s toes. I know I’ve played some good ball the last few years and I just want to come in and help how I can help. I don’t have an ego, I’m not coming in to try to flex or anything like that. I just want to win and that’s all that matters to me. Everything else will take care of itself.”

Has a key head start in one area

Seahawks cornerbacks under Carroll are usually very similar. They’re tall, have long arms, and use the “step-kick” technique at the beginning of a play while pressing opposing wide receivers. Dunbar, who entered the NFL as a receiver, has worked out with Marquand Manuel, a former defensive assistant with the Seahawks who played safety in the NFL.

So while he’s behind his other teammates overall, as far as the required technique for Seattle’s defense, he’s got some experience already.

“It helps a lot as far as the technique standpoint,” he said of working with Manuel. “… Ever since I made (the transition from receiver to cornerback) I’ve been working with Marquand Manuel every year, offseason, throughout the season, working on my technique. So some of the things these guys do, I’ve been doing and implementing in my game for years, so it kind of helps me.”

And while many have tabbed him to be a starter at the outside cornerback position, Dunbar knows he has to get fully prepared and ready before he’s competing for playing time.

“Football is about a game of reps – mentally and physically,” he said. “Not having (Organized Team Activities) and those things and then to come here late … I’ve got a long way to go.” 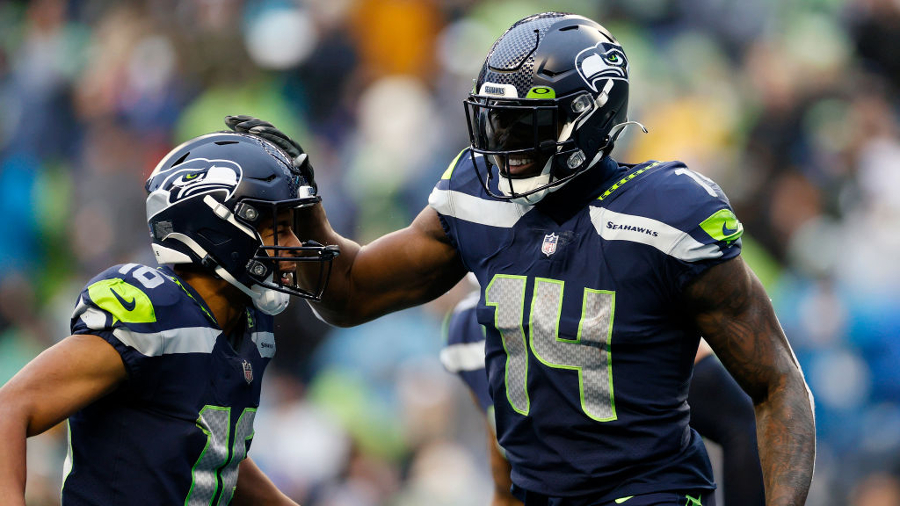