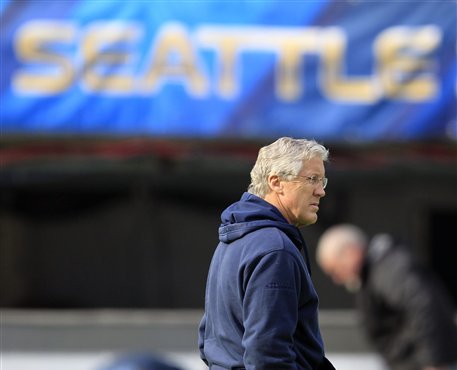 EAST RUTHERFORD, N.J. – The Seahawks got a look inside MetLife Stadium Saturday morning before holding a 35-minute walk-through at the adjacent practice facility, their final work before Sunday’s Super Bowl.

According to a pool report by Ralph Vacchiano of Pro Football Writers of America, Seattle’s players and coaches appeared loose and energetic as they went through the same preparations they normally do the day before a game.

Cornerback Richard Sherman is seen in one Associated Press photo preparing to throw a snowball. Coach Pete Carroll pulled a prank on an unsuspecting friend, positioning him to get hit in the gut with a long snap.

“We’re ready to go,” Carroll said. “That’s kind of how we are. I don’t know if it’s loose, but we’re where we’re supposed to be. This is how we always prepare. This is the exact routine we always do. And the guys did it perfectly today.”

The Seahawks arrived at MetLife Stadium around 10:30 a.m. Saturday. They first checked out the locker room they’ll use Sunday and then walked around on the field for about 15 minutes, some players taking photos and videos of the empty stadium. From there they went to the practice facility, where they held meetings and posed for the team photo before conducting the walk-through that capped a week’s full of preparation.

“It’s been great,” Carroll said. “We have no hesitation saying it’s been exactly what we hoped to get done. We’re physically right and mentally right and we’re ready to go.”

Among the guests during Saturday’s walk-through were former Seahawks Shaun Alexander and Isaiah Kacyvenski, both members of the 2005 team that was the only other in franchise history to reach the Super Bowl.

“It’s always great to see Shaun and those guys,” Carroll said. “It’s good to have them around. It just kind of reminds us what we represent.”